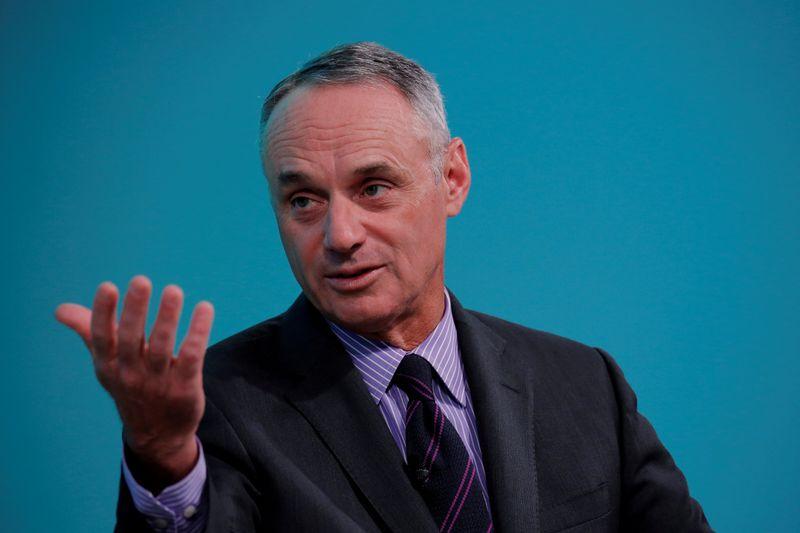 Major League Baseball commissioner Rob Manfred and players union executive director Tony Clark re-opened talks geared toward getting baseball back on the field and away from the negotiating table and are closing in on an agreement.

“At my request, Tony Clark and I met for several hours (Tuesday) in Phoenix,” Manfred said in a statement Wednesday. “We left that meeting with a jointly developed framework that we agreed could form the basis of an agreement and subject to conversations with our respective constituents. I summarized that framework numerous times in the meeting and sent Tony a written summary today. Consistent with our conversations (Tuesday), I am encouraging the Clubs to move forward and I trust Tony is doing the same.”

ESPN’s Buster Olney reported the offer on the table from owners is to play a 60-game regular season starting July 19 with a full prorated portion of individual player salaries. ESPN’s Jeff Passan reported players see a “pathway to a deal.”

The division between owners and players appeared to be growing through public negotiating tactics and modest proposals. Clark and the union broke off negotiations on Saturday and ultimately asked Manfred to use his power as commissioner to set the outline of the season, including the number of games and when the playoffs would end. The statement from Clark prompted players to launch a social media campaign of which the gist was “Tell us when and where” the season will begin.

Manfred is pushing to play the season according to multiple franchise owners and decision-makers, who’ve talked about the challenges facing baseball on the record. Whether he has enough support from owners to put players on the field for games that won’t likely include fans in attendance is another matter.

Red Sox president Sam Kennedy said Tuesday in a NESN interview that “No one wants to play baseball more than Rob. … Nobody is more dedicated to serving the game than Rob. He’s been working in baseball, working with the owners, the front offices for decades. This is something that is critical and both sides need to talk and get to a place where we can get the game back on the field. But as you heard (Monday) night, that’s very, very difficult to do without a lot of dialog. So I’m very hopeful on behalf of our fans and everyone in our front office that the dialog picks up and the two sides are able to talk and get to a place where we can start playing again. The country needs baseball and we’re ready to go at Fenway Park.”

The Athletic’s Ken Rosenthal reported “at least eight” owners are against playing the 2020 season.

Manfred needs approval of 22 of baseball’s 30 owners to resume the season.